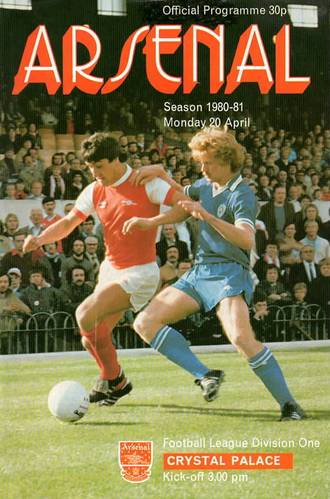 In the quest for the good life, just over a year ago I took a pledge, an open-ended vow of abstinence, a sabbatical from one of my irrational, unnecessary obsessions. Before then, Arsenal’s vicissitudes would punctuate my days, background noise to my own personal meanderings, successes, failure, pratfalls.

When dad took me occasionally to Highbury on Saturday afternoons London was an enigma. After the clunky slam-door train ride from East Croydon to Victoria, we would then be underground until surfacing at Finsbury Park or Arsenal tube station. Tunnelling through the cylindrical walkways between the lines at Green Park or Kings Cross, I was a chavvy narcissistic youth fascinated by the procession of posters advertising intellectually remote West End plays, films, exhibitions, a complex adult world apart from the mundanities of Croydon, that distillation of suburban anaemia.  Football was the only reason to venture into London’s maelstrom.

We would then retrace our steps, rolled up programme in hand, thinking of junk food, my father pressing the portable ‘wireless’ to his ears for the final scores.

Later, living in Hackney a few years before the beards took over, I would regularly pass road signs indicating places like Finsbury Park, Stoke Newington, Wood Green, Harringay. These formerly theoretical mysteries were now familiar thoroughfares where I would plot the fastest route to the next pint of real ale. A reliable bike and a steady job enabled me to de-mystify the city, a boozy metropolitan wayfarer.

I attained football consciousness just too late to have savoured Arsenal’s ecstatic cup final defeat of Manchester United in 1979. I remember reading in a hardback boys’ annual about the debacle of the 1979/1980 season when Arsenal were in line to win one or all of league, FA Cup (in the final against Second Division West Ham) and Cup Winners Cup (in the final against Valencia), or at the very least to have qualified for the following year’s UEFA competition. Arsenal blew it on every front, most spectacularly by getting smashed 5-nil at Middlesborough on the last day of the season.

‘And they were left with nothing,’ ended the review. That sad peroration has remained with me ever since.

After this failed revival of quondam glory, Arsenal entered the doldrums of mediocrity. Liam Brady, perhaps the club’s only almost-world class player, missed a penalty in the shoot out with Valencia and left the club for Juventus in the summer. That was precisely when I got hooked. Crystal Palace 2 Arsenal 2 was the first match I ever saw in the flesh, on Boxing Day 1980, the season after the multiple debacles. (I had to check the result just now. All these years I thought it had been a dreary 1-1.) Then we went to Highbury for another abject draw with Stoke. (That one was 1-1; I have verified.) I remember how big the players looked. David O’Leary seemed collosal though his stats, which I had memorised via the Panini sticker album, showed him not even 6’. (He measured 5’11’’). I assumed all football was stale and anticlimactic. So began the wilderness years. The cradle of the Boring Boring Arsenal epithet, which was reappropriated with smug irony by the North Bank during the free-scoring years and has been long since forgotten in the interminable era of late Wenger.

The years of trophy-less mediocrity dragged on, shorter but feeling a lot longer than the 10 years between Wengers 2004 ‘Invincibles’ and 2014 FA Cup. I remember the sullenless of the sports pages – losing, no score draws, never reaching the cup final. Time passes so slowly when you are young. Watching the Wrestling on World of Sport on ITV where the latest scores would appear at the bottom of the screen while ‘Giant Haystacks’ molested spindly race-object ‘Kid Chocolate’ until the latter’s tag partner ‘Big Daddy’ stepped in to restore justice. When I stayed with my aunt they only had the Sporting Life which never had any football, not even the scores. Such a cruel joke. It just didn’t make any sense. Then on Sundays the deflation of arriving at the newsagents too late in the day and the empty melamine bottom shelf.  Without football life seemed barren.

Anyway then there was George Graham and the final flowering of title-winning English youth – Adams, Rocastle, Thomas etc. and a whole industry of blokes and some women writing whimsically about Arsenal in the 80s and 90s. I won’t go on. The market is saturated. You don’t want to read another exercise in what EP Thompson, referring to the role of Methodism on industrialising Britain, called ‘psychic masturbation’. I have already had my self-entitled whinge about the interminable ‘lather, rinse, repeat’ cycle of Wenger since 2004. I charitably believe that Arsenal fans owe their collective status as insufferable bellends to this endless loop. True, there are some notable exceptions – Arseblog, Mo Farah, one or two others. The rest of us are 50 shades of embarrassment. Wenger and his philistine corporate sycophants have literally, the theory runs, driven Arsenal fans potty. Potty enough to have Arsenal Fan TV. Potty enough to commandeer aircraft to do flyovers with competing Wenger Out and In Arsene We Trust banners.  Potty enough to attack the infuriating but basically decent veteran Alsatian manager at Stoke railway station with the desperate plea ‘Get out while you can, Joel’ – as if Joel Campbell, one of Wenger’s most underwhelming little purchases, was the only one worth redeeming from the flames of Sodom.

Hence how, a few days after the elation of Arsenal’s unfancied defeat of recently-crowned champions and their recurring nemesis Chelsea, all turned to dust as it became clear that Wenger had no intention of retiring to his wine cellar, nor of buying lots of expensive new players.

So for the sake of my sanity I don’t bother watching their matches anymore. I am rewarded with a few extra hours of attention per week to devote to other more noble endeavours, like family, the arts or simply scratching my hole. The time dividend is less important however than the improved mental equilibrium that comes from not allowing your moods to be swayed by the antics of 11 men pursuing pig’s bladder across manicured sward.  I still follow the scores in real time, a bit like certain people (the Germans, apparently), enjoy inspecting their own shit and that of others.

Twenty years ago I found solace in a new label to express my religious leanings after my spiritual and social awakening. I called myself a Post-Evangelical, a term coined by David Tomlinson: someone who had come through that suffocating Pharisaic order but not so wounded and embittered as to need to depart altogether from Christianity and its profound spiritual riches.  Likewise I have alighted on a term when it comes to my footballing allegiances. I am now a post-Gooner.

Now with FIFA and Putin’s world cup next year and the next one built by slave labour in Qatar, Ronaldo’s waxed torso, Jose Mourinho, a Middle East autocracy owning a whole football club, and Chelsea in general, I don’t really know what football is for anyway.

Apart from actually playing it of course. One day I will be too old for that too. Now there, truly, madness lies.