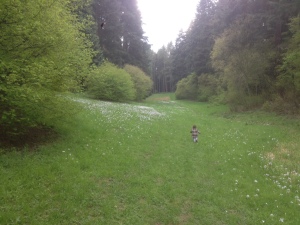 I am one of those landlubbing devotees of the Shipping Forecast. Dogger, Fisher, German Bight, Humber, Thames, Dover, Wight. It’s a litany of just-fathomable poetic code, a ritual Stations of the Coast, the ticking of the big hand of a clock, swinging round the islands towards me in my Flanders exile and away again. I imagine the reader as a priest rhythmically sprinkling holy water at regular intervals, passing over places and words where I’ve walked or of which I’ve read, including Malin, near where my mother lives, and those wild remote shores, Ireland stretching its gnarled fingers into the surfy turmoil.

An English tradition on Ascension Day is beating the bounds of the parish. I did it once in Hackney. It is one of those characteristically vague compendia of obscurity, the origins lying somewhere between administrative functionality and pagan ritual, eventually subsumed, co-opted by the medieval church.

The shipping forecast, if I may be permitted one last analogy, is like the beating of the British bounds, tracing the insular outlines of the only thing that truly unites its inhabitants, cosseted, diligent, rebellious and marginal.

I’m beyond those boundaries now, but I’m always looking back in, which I’m sure prevents me from integrating in my new home.

Nothing draws my retrospection so irresistibly as the politics of the UK. The general election campaign seemed pure Vaudeville – the ridiculing of Miliband and the demonization of the Scots, Cameron ‘chillaxin’ and then all a sudden ‘pumped’, Leanne Wood saying Wa-ales loads of times, the Edstone, Russell Brand, and everything that Farage did and said. Ed Balls.

I was partial, although living abroad the outcome doesn’t affect me, but still I was deeply disturbed by the outcome on the morning of 8 May, as if the failure of the centre-left and the triumph of the Tories was some signal of personal inadequacy.

Dawn broke and the sun shone on conservative England, and let me feeling sore and ashamed. I’ve never been more than on the fringes of activism. I am politically supine, a desktop handwringer. I have never been sure enough of myself and my tribal beliefs to knock on doors and stand on soapboxes to try to persuade people to do something that they would not otherwise do.

I was once almost wholly convinced of a religious doctrine, which propelled me to evangelising, but I never really believed strongly enough to follow through on those convictions. (And when I recall some of the urgings of the Inner Voice during those salad days, thank God I didn’t.) But then that was broken on the anvil of reality, and I was lured away by an alternative vision, perhaps equally unattainable, of Homeric meanderings, the eclectic poetics of Joyce and the others.

For now, the subaltern gaze of my Indian heritage alights and lingers on the insouciant comforts of England’s ruling elite, now more comfortably restored to their rightful berth than any time since the demise of Thatcher. The image of Cameron, his pasty face which historically has rarely been troubled even by so much as a wisp of bumfluff, savouring the dawn of victory in his seigneurial Oxfordshire bastion of Witney; hard to recall that all politics ends in failure amidst this seeming return of the natural order of things.

The best lack all conviction, while the worst can neither summon much passionate intensity.

What after all is party politics for? I like to believe that had I the time and space to think things through, I might be able to contribute to a pragmatic and progressive politics borne out of a genuine respect for the environment and humanity. (A party for immigrants perhaps?)

In the meantime I’ll bask in the erratic sunshine of the loveliest month of the year, just inland beyond the offshore waters of Dover.