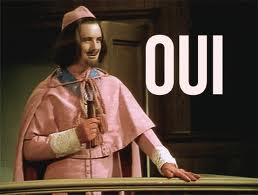 This is not supposed to be a blog about the EU, and I’m not one to say told you so but….

During the week that was the Brussels commentariat is coming alive to the self-aggrandising chicanery which these pages foresaw a couple of months back.

First, there was the leaked memo spelling out in Teutonic detail how the President  intends to control the delivery and depiction of his ‘political guidelines’. A wish list surely concocted during the past eight years in which Viviane Reding  revelled in chasing headlines with off-message self-promoting pronouncements on other commissioner’s policy areas. Such noising off, now that the one-time court jester has become the master of ceremonies, kann nicht mehr sein.

Second, there was the unedifying spectacle of the commission threatening to withdraw its proposal – the European institutional equivalent of a boy taking his football home in the middle of a kickaround in the park because he’s losing – on waste reduction. Not because the European  parliament and council were conspiring to scotch environmental standards – on the contrary they like most of us want to fight one of the blights of contemporary existence which is the ubiquitous plastic bag. No, the motivation was a craven fear of the EU reputational damage wrought by another new EU target – even if voluntary. It is an example of a misplaced and hopelessly overdue urge to ingratiate themselves with Eurosceptics under the (worthy) banner of better regulation. Instead the new commission emerges with its credibilty for loyal cooperation and environmental stewardship tarnished.  His eminence should forget the Daily Mail  – they are never going to placated, nor should they be.

The antics of the new regime starts to resemble the machinations of that ultimate insular micromanager, Prospero, only minus the poetry.